What do you get when you infuse a high-end electric passenger vehicle with the DNA of a hypercar? The result is a luxury electric passenger van unlike any other vehicles on the market today. In a symbiotic partnership across products and geographies, CSD Nasdaq Dubai-listed supercar company W Motors has teamed up with Chinese EV company ICONIQ Motors to build an inspiring and iconic EV named the Seven, which combines technology with luxury and beauty.

In a symbiotic partnership across products and geographies, Nasdaq Dubai CSD-listed supercar company W Motors has teamed up with Chinese EV company ICONIQ Motors to build an inspiring and iconic EV named Seven that combines technology with luxury and beauty.

However, what's more unique about the ICONIQ Seven is it's not designed around its driver. Instead, it intends to offer the ultimate luxury mobility experience for its passengers in the era of renewables, IoT, and autonomous driving.

Founded in 2012 by entrepreneur Ralph Debbas, W-Motors is headquartered in Dubai and builds some of the world's most expensive and most powerful hypercars. The company achieved global fame after an appearance in the seventh episode of the Fast & Furious movie franchise in 2015, when a W Motors Lykan HyperSport driven by Hollywood star Vin Diesel dashed between two skyscrapers.

Looking towards the future, Debbas says his company will eventually phase out internal combustion engines and go fully electric, as well as branch out into other mobility ventures by pivoting the company to a complete mobility and technology provider. ICONIQ Motors in China has become the natural choice.

ICONIQ Motors aims to be one of the world's most pioneering smart electric vehicle companies by integrating cutting edge designs, IoT connectivity, and autonomous driving technology into what it calls a "passenger-centric green premium mobility solution to the world."

ICONIQ was founded in 2016 by entrepreneur Alan Wu, who has been partnering with W Motors' CEO Ralph Debbas since the company's inception. The two shared the passion and vision of developing a new line of high-end luxury electric vehicles focused on the passenger experience, but could also be used for luxury VIP mobility services. ICONIQ did a benchmark study and found that the luxury electric multi-passenger vehicle (MPV) market was not being addressed by the world's automakers.

The brand name, ICONIQ, derives from the company's vision to create an automotive "ICON'' with highest levels of technological "IQ." This includes building stylish electric vehicles that are luxurious, smart, and connected.

By partnering with ICONIQ, Debbas and the team then set out to incorporate the hypercar DNA of the W Motors Lykan Hypersport and Fenyr into a multi-passenger electric van. "This is what we brought to the table," said Debbas. "It's good to have Hollywood mixed with supercars and hypercars and bring in this international scene to ICONIQ Motors." 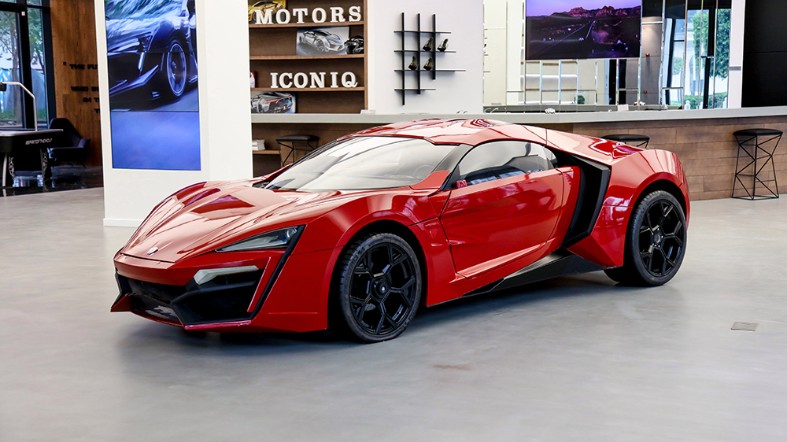 The ICONIQ Seven Will Be Entirely "Passenger-Focused"

At first look, the ICONIQ Seven stands out visibly from other vehicles on the road today. The luxury feel, performance, and styling cues of the Seven comes directly from the world-class supercars produced by W Motors. The spacious interior allows ICONIQ to add its own interpretation of the ultimate passenger experience.

"It's really something that worked out, but it wasn't easy," explained Debbas. "It was a big challenge for us to design something like that."

A typical commercial passenger van is used for basic transportation needs, such as shuttling employees to business meetings or to airports for corporate trips. Traveling in one, however, is seldom a memorable experience, as these vehicles are intended to provide conventional transportation. What's lacking in these vehicles is refinement, comfort, and functionalities that create a superior passenger experience during the journey.

The Seven's interior emphasizes personalization, comfort, space, entertainment, office, luxury, and safety at a price that will be attractive to both individual and business clients.

For W Motors, working with ICONIQ provides the company with experience in mass-producing vehicles, instead of just building a small number of million-dollar supercars for a handful of wealthy customers, explained Debbas.

In 2021, ICONIQ relocated its headquarters to Shenzhen, which is China's emerging technology hub for electric vehicles and home to its two strategic partners, AutoX and AMER International, which will provide advanced autonomous driving technologies and supply chain support to ICONIQ.

ICONIQ said the Seven was conceptualized and defined by autonomous driving and AI technologies from the very beginning, making it one of the first electric vehicles designed around the passenger experience rather than the driver. ICONIQ is working with AutoX to integrate its latest generation autonomous driving system into its future vehicle developments.

AutoX's powerful processor, which delivers 2,200 TOPS (1 trillion operations per second) of compute power, can support the deployment of SAE Level-4 and above autonomous driving technologies (in designated areas) that require no human oversight. It will ensure the highest level of safety for ICONIQ's autonomous capable electric vehicles.

AMER International, which ranks 68th out of 2021's Fortune Global 500, will provide ICONIQ with access to raw materials for volume production, as well as working capital and supply chain management.

China is the world's fastest-developing EV market, with a growing number of consumers wanting electric vehicles with a bigger interior space for families and a more refined passenger experience. Transportation and hospitality companies are also seeking to add more luxurious and comfortable electric vehicles to their corporate fleets. The ICONIQ Seven is well positioned to meet these needs.

Having assembled a global team of experts from the beginning, ICONIQ intends to expand its business progressively beyond China.

To start with, ICONIQ  has a solid foundation to expand in the Middle East via its unique relationship with W Motors, plus existing clients such as the Abu Dhabi Auto Co and Dubai's Safe City Group. The region's shift from fossil fuel to clean energy offers a great opportunity for ICONIQ Motors to build its future there.

In addition, ICONIQ has already made Thailand its beachhead into Southeast Asia, which is essentially a blank slate for smart urban infrastructure. The country is an ideal market to promote EVs, connected vehicle networks, smart city developments, and autonomous driving supported by 5G networks.

The ICONIQ Seven will provide the ultimate luxury experience for passengers.

ICONIQ showcased the Seven SPV at some of the world's most prestigious auto shows including a 2016 appearance at Pebble Beach's Monterey Car Week, where it received global recognition for its sleek design.

The second generation of the Seven debuted at the Shanghai auto show in 2019, after which a 5,000-unit order was received from Dubai's Safe City Group, which provides public safety and security solutions in the United Arab Emirates.

In total, ICONIQ said it has received written MOUs for over 50,000 units of the Seven from high-profile corporate clients across China, UAE, and SEA markets.

Three versions of the Seven SPV will be available, including Mobility, Premium, and VIP model, offering seating configurations for 7, 6 or 4 passengers, respectively, along with different levels of refinements.

The VIP version will offer the ultimate luxury passenger experience and highest level of comfort and technology to meet the needs of its discretionary clients. For example, it is designed to seat four passengers only and will have a 37" HD interactive display with a full suite of smart connectivity features.

ICONIQ's future plans also include creating a fully integrated business service platform that will enable corporate clients to design and customize both the hardware and software of their ICONIQ fleets to meet the needs of their customers as well as smart city developers.

Despite its strong ties with ICONIQ, W Motors will remain an independent company. "For us, ICONIQ is a client and strategic partner," Debbas said. However, he did say that the companies are equal partners when it comes to cross marketing and future electric vehicle development.

ICONIQ plans to follow the Seven with the MUSE compact autonomous shuttle in 2025, which will be equipped with L4 autonomous driving technology. It will not have a steering wheel or brake pedals, thereby freeing up the cabin space for passengers. The configuration also allows for more options in designing the interior for both personal transportation and commercial mobility. 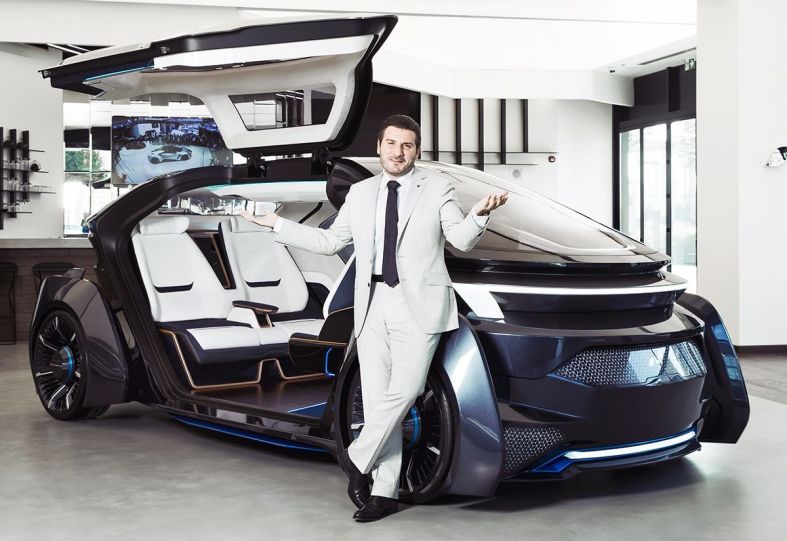 W Motors is currently working on a "sub million dollar" fully-electric supercar that could debut by next summer. With 1,600 horsepower and six electric motors under its hood, it will be the first model of a new EV line being launched by W Motors. "It's going to be quite impressive to look at," Debbas said. "We took advantage of learning from ICONIQ and adapted into W Motors."

W motors is also developing a more affordable electric supercar that will be launched under the ICONIQ W Series, and to accelerate ICONIQ's entry into the performance EV market more quickly, Debbas said. So don't be surprised if W Motors and ICONIQ team up to build a fully-electric supercar that would compete with the likes of the Tesla Models S Plaid, Porsche Taycan. Mercedes-Benz EQS and Lucid Air Dream Edition.

Until then, W Motors will continue to work with ICONIQ on reinventing the passenger experience with the ICONIQ Seven SPV, which is expected to be coming to the market very soon.

All information contained herein as well as on the CapitalWatch website is obtained from sources believed to be reliable but not guaranteed to be accurate or all-inclusive. All material is for informational purposes only, is only the opinion of CapitalWatch and should not be construed as an offer or solicitation to buy or sell securities. The information includes certain forward-looking statements, which may be affected by unforeseen circumstances and/or certain risks. This report is not without bias. CapitalWatch received remuneration for this report. Please consult an investment professional before investing in anything viewed within.