Market Finally Cracks. Is The Bull Market Rally Over?

As we have said for weeks, the market's "unstoppable" advance showed many "technical extremes,"

Over the last few weeks, we have discussed that while the markets were continuing their seemingly "unstoppable" advance, there were many "technical extremes" reached.
Here is the problem with watching media headlines rather than paying attention to what is happening in the underlying market.
On Wednesday the headlines said this:

On Thursday, it was this:

But Thursday was not a surprise, As noted in "Winter Is Coming."

The most critical point of that article was the extreme deviation from long-term means. As noted, trend lines and moving averages tend to act as 'gravity.' The further away the market moves from the trendline, the greater the pull becomes 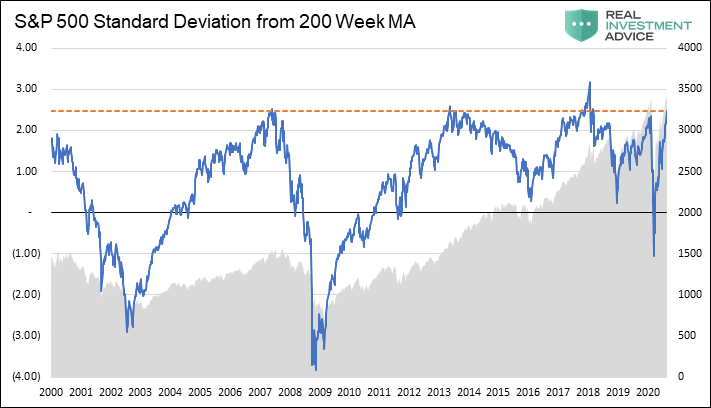 When markets are pushing extremes, it seems like it is a "no-lose" scenario for investors. It is at those moments when "selling high" becomes opportunistic, but is incredibly hard to do for the "Fear Of Missing Out (FOMO)"

The question now? Was it a one day blip, or the start of a more significant correction process.

Signs, Signs, Everywhere Signs
Over the last three weeks, we have been publishing "signs of exuberance," which have ranged from incredibly high options speculation to investor positioning. Some of these indicators are now at levels only seen in 1999.

So, did the Thursday/Friday selloff reverse the majority of those excesses back to levels where reward now outweighs the risk?

The short answer is "no."

On every level, the market remains overbought and extremely extended from intermediate moving averages. A one or two-day correction will not reverse those levels back to a "buying opportunity."

However, there is currently a tremendous amount of "bullish sentiment" in the market, which may lead to several attempts at "dip buying" before a correction is complete, which we saw on Friday.

Was that the 5% correction we talked about last week?

As discussed in "Winter Approaches: "a correction of 5-10% has become increasingly likely over the next few weeks to two months. While a 5-10% correction may not seem like much, it will feel much worse due to the high level of complacency by investors currently.
All of the data suggests that "Winter Is Coming." Therefore, this is why we are adding "value" to our portfolios to prepare for colder weather."

Not surprisingly, the selloff on Thursday and Friday shocked a lot of inexperienced investors that thought it couldn't happen. 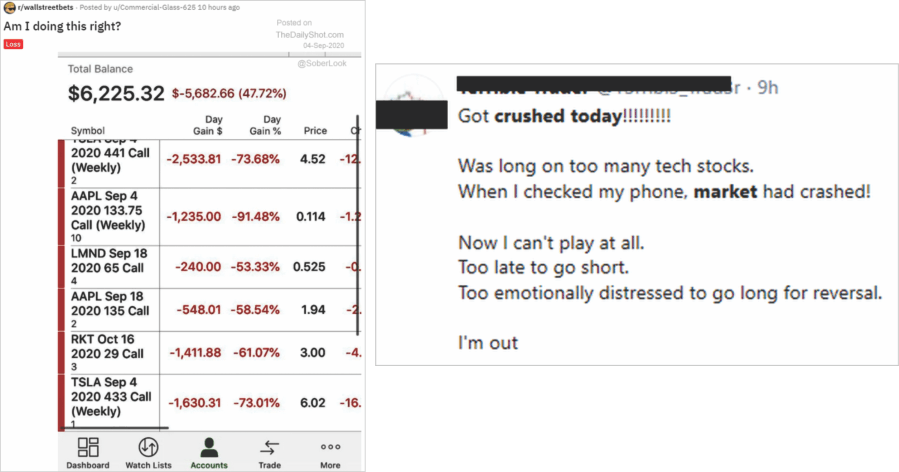 Momentum Is Hard To Kill
There is one crucial aspect of the market, which you should not dismiss – "momentum" is extremely hard to kill.

Many "retail" investors will immediately view the selloff on Thursday and Friday, and the media, as a reason to pick up "stocks on the cheap." The general bias in the short-term is that you should buy every "dip," and for a brief period, they may indeed be proved right.

We can validate that view by looking at speculative call buyers, who, despite the pullback, increased their leveraged market bets. (Chart via Sentiment Trader) Furthermore, this amount of speculation is historically unprecedented. The eventual outcome when this all unwinds is obvious.

However, in the short-term, the market has pulled back to very short-term support. We suspect the pullback will entice a lot of the momentum buyers, and those who "missed out," to jump back in.

A sellable bounce next week, in lighter post-holiday trading, is very likely. 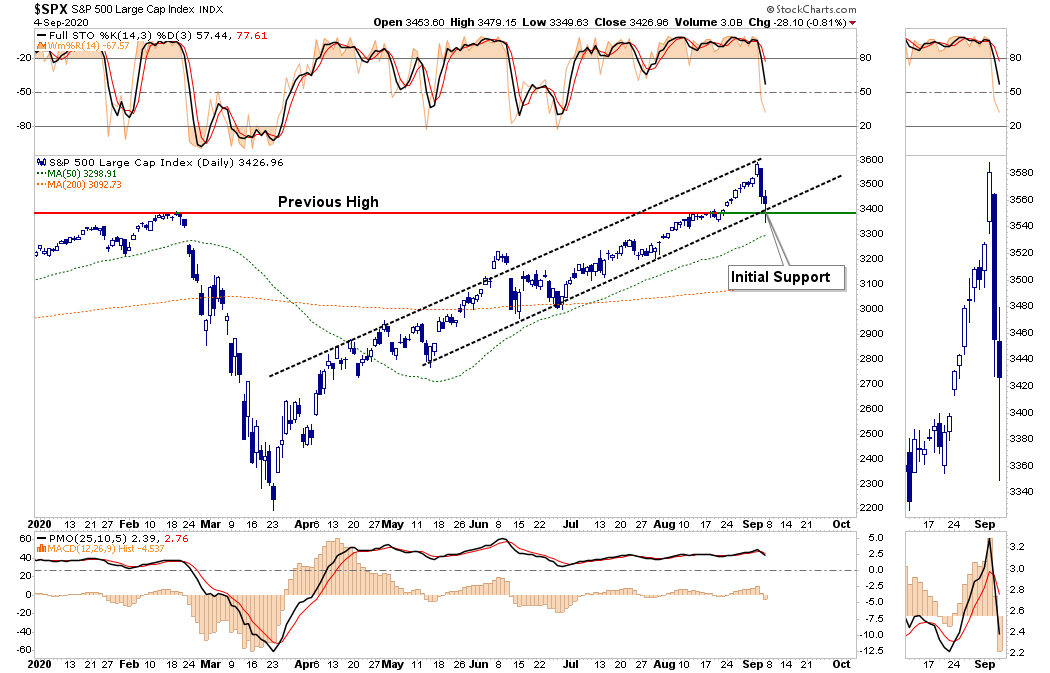 Furthermore, as we noted previously in a "Tale of Two Bull Markets,"the deviations longer-term are still problematic. The extensions are so large it will require several days to weeks of a correction to work off the extremes. As shown, last week's decline is barely noticeable and did little to reverse the longer-term overbought conditions. 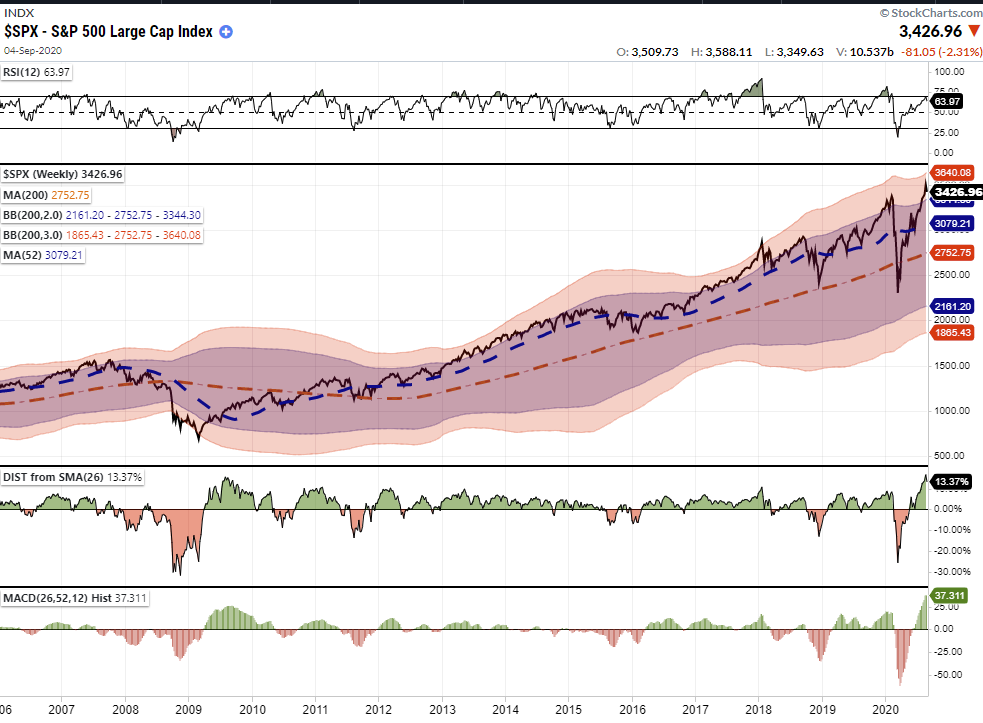 Portfolio Positioning
Currently, we are trapped.

In the longer-term, markets are overbought, overvalued, and extended against a backdrop of weakening economics, a potential political upheaval, and poor earnings outlooks.

On the other hand, we have an exceedingly bullish market, extreme momentum,  and a shorter-term defined bullish uptrend.

So what do you do? The same as do you with a "porcupine."

You deal with it very carefully.

On Friday, we used the early market lows to add to some of our technology positions that we had discussed reducing recently:

Consequently, given the more extreme short-term overbought conditions and deviations, the risk of a short-term reversion has risen. Therefore, we spent this past week harvesting some of our gains (AAPL, MSFT, CRM, ADBE, AMZN) and planting a few seeds for our 'Fall' garden (VIAC & T)
Importantly, this does not mean we sold everything and went to cash. We continue to maintain our equity exposure to the markets. We are just reducing risk by 'hedging around the edges,' adjusting our bond duration, and adding more 'defensive' names to our equity allocation."The additions on Friday are only moving us back to target weights in some of our holdings from being underweight before the correction.

Importantly, we remain "bullish" on the markets currently as momentum is still in play. However, we also realize the tremendous amount of risk that remains due to overvaluations, extensions, and deviations.

If the short-term trend of the market changes from bullish to bearish, we too shall change our positioning accordingly.

The problem for most investors is either a lack of a discipline to manage capital or an unwillingness to acknowledge that what was working no longer is.

We prefer to acknowledge change and have the discipline to deal with it.

The above edited article It first appeared on RIA on Sept. 4, and then on https://www.bullsnbears.com

Bulls N Bears
BullsNBears.com was founded to educate investors about the eight secular bear markets which have occurred in the US since 1802.  The site publishes bear market investing recommendations, strategies and articles by its analysts and unaffiliated third-party and qualified expert contributors including Mr. Roberts.
CapitalWatch Disclaimer
The opinions expressed in this article do not reflect the position of CapitalWatch or its journalists. Capitalwatch has no business relationship with any company whose stock is mentioned in this article. Information provided is for educational purposes only and does not constitute financial, legal, or investment advice.