While U.S. tech empires start to crack, Amazon is caught in the middle of the other FAANG companies. 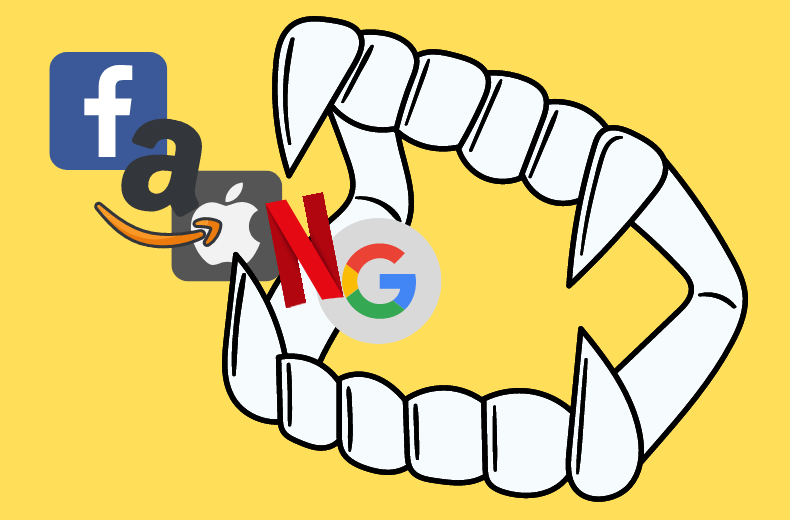 Each of the FAANG companies is facing its own battles as macroeconomic conditions remain precarious at best. Amazon's (Nasdaq: AMZN) decline might be the average among them.

Facebook, nearing a year of being renamed Meta (Nasdaq: FB), isn't delivering on the hype it raised for its new prospects. Apple (Nasdaq: AAPL) is contending with supply chain chaos, but it's holding on with some promising reports. Netflix (Nasdaq: NFLX) is tanking fast as subscribers leave the platform and it struggles to compete in the now-saturated streaming market. Alphabet (Nasdaq: GOOGL) also hasn't made waves as its shares fall, but it's far more stable than some peers.

During 2021 and 2020, Amazon saw beyond stellar performance as consumer demand was driven to unprecedented levels. However, as Covid-19 fears have waned, shoppers went back to pre-pandemic habits after heavy dependence on Amazon's delivery.

Amazon is holding out against tough times, but still has to contend with chaotic markets and a rapidly evolving investor base and workforce.

The company had a stable earnings report in the first quarter of 2022, but still took significant losses as rapidly developing economic and geopolitical conditions rocked the start to the year.

In the first quarter of 2022, Amazon reported a $3.8 billion net loss. The company credited the loss not to economic conditions but a large investment in the electric vehicle maker Rivian (Nasdaq: RIVN).

Although it took losses, Amazon did report a 7% increase in sales compared to the first quarter of 2021. The company added that net sales increased 9% when excluding the $1.8 billion "unfavorable impact from year-over-year changes in foreign exchange rates throughout the quarter."

Wiping its pandemic gains was dramatic, but the success the company has seen in recent years wasn't sustainable. It's not logical that people will only use delivery or e-commerce when they have other options.

As a top e-commerce company, Amazon was naturally a first choice among consumers when lockdowns forced them inside. Amazon's business is still strong, but it's natural that when people can buy things from a trusted source elsewhere, sometimes they will.

The tech sector has also been famously known for workplace cultures that promote overwork, and now many employees are leaving large companies or the industry entirely for a better work-life balance. Amazon has also been caught in a flurry of ethical controversies and more young workers are interested in working for at least neutral companies.

Buckling under the pressure, Amazon has fallen from its pandemic glory days when it peaked at $3,773.08 per share and had a $1.6 trillion market cap.

It is getting hit by market dips and uncertainty all over, but Amazon is not the worst off among the FAANG companies.

Netflix's fall from grace is the cornerstone of FAANGs loss of traction in the tech market. The streaming service's shares have plunged alongside its subscribership.

Once the pioneering leader of an emerging industry, Netflix now has a bustling market of competitors including Disney+, HBO Max, and Amazon Prime. Its expensive originals aren't keeping viewers entertained enough to pay.

In January, Netflix announced dramatically slower subscriber growth this year, a figure that fell 64% below analyst expectations. Company shares dove 20% after the report, and Netflix shares have gone down just under 70% so far in 2022.

Meta's intense metaverse campaign doesn't seem to be achieving its goals. The company's shareholders have been extremely disappointed in its recent performance and it's lost $232 billion in shareholder value.

Company shares are down almost 50% since the start of the year, second only to Netflix in losses among the FAANG companies. Meta is losing steam fast as a social media company and investors are starting to feel scorned by its latest prospects.

Apple shares are down over 25% so far this year, but the company has been able to secure some approval with an above-par performance despite its obstacles.

Apple gave a record-setting fourth quarter earnings report in 2021 reporting an 11% increase in revenue to almost $124 billion and a profit of around $34 billion.

The company is contending with the ongoing shortage of essential materials for tech products. Goods ranging from raw materials, semiconductors and assembled products remain constrained and in short supply as manufacturers struggle to accommodate demand.

Among other hopefuls are Google parent Alphabet which beat expectations in the first quarter and a 20-for-1 stock split likely to attract more retail investors.

In the first quarter of 2022, Alphabet beat revenue expectations by over $3 billion. Google also outperformed in advertising and Google Cloud revenue went up 45% to $5.54 billion, $70 million higher than analysts' forecasts.

Alphabet has also seen the smallest losses year-to-date at around 24% and at over $2,100, its share price is over one hundred times higher than any other FAANG company. The company's shares closed up almost 3% Wednesday.

Amazon and its peers are being hit especially hard by the Fed's dramatic interest rate hikes. Everyone from everyday consumers to major businesses are losing out and FAANG companies excluded.

FAANG companies have all been mired in controversy and now the talent that once flocked to silicon valley is turning away. If not accusations of toxic workplaces and union busting it's data privacy leaks or individual scandals of executives. Many tech workers are now more interested in companies with better reputations and where they may feel more valued than a large corporation.

FAANG companies are being held to the flames, but they'll pass the trial by fire. These are high-growth, large, stable companies that are still profitable. There's a slew of valid reasons to pass on them, but it's unlikely your investment would tank in the long term if you're aready in.

Google and Apple are showing signs of hope for the future while Meta and Netflix are staying on their downward slide. Caught in the middle, Amazon stock isn't standing out by any measure among FAANG companies right now.