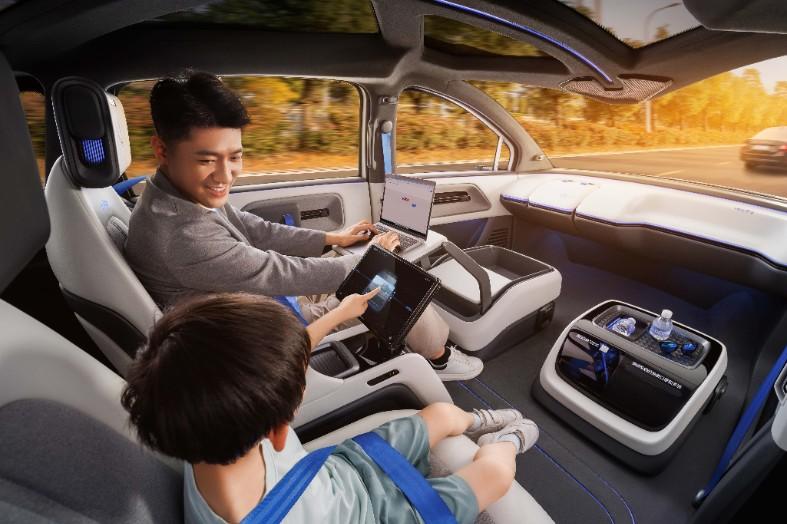 The Apollo RT6 is the sixth generation of Baudi's autonomous vehicle and was built from the ground up for commercial ride-hailing. It's the first vehicle built on Xinghe, which is Baidu's in-house developed automotive E/E architecture specifically designed for fully autonomous driving.

All of the RT6's electrical components and hardware are 100% automotive-grade with full redundancy throughout both hardware and autonomous driving software. The older generations of Baidu's autonomous vehicles were retrofitted from conventional vehicle platforms.

The futuristic RT6, which includes a removable steering wheel to free up additional cabin space, will be used in Baidu's commercial autonomous mobility service Apollo Go. The steering wheel-free design allows for more customization of the interior, such as adding extra seating, desktops, gaming consoles, even a small vending machine where passengers can purchase snacks or drinks.

Baidu's Apollo Go service is similar to U.S. ride-hailing companies Uber and Lyft. Riders use an app to summon a driverless Apollo Go vehicle and wait at a nearby station for the vehicle to arrive and pick them up.

The Apollo RT6 is slated to join the Apollo Go ride-hailing service fleet starting in 2023. The number of vehicles on the platform is expected to grow to include ten of thousands of vehicles.

IHS Markit predicted in its 2021 China's Autonomous Driving Market and Future Mobility Market Outlook that driverless robotaxi services like Apollo Go will account for 60% of China's $347 billion ride-hailing market by 2030.

Since then, the Apollo platform has come to be regarded as the "Android of the Automotive Industry." It's the largest open-source autonomous driving platform in the world, according to Baidu.

Baidu is now working with over 200 industry partners as part of Apollo, including automakers BMW, Daimler and Volkswagen, and hardware manufacturers Intel and Nvidia.