What appears to be a group of third-party investors are offering to acquire the cloud solutions platform as Chinese U.S.-listed firms reel from low valuations.
Anna Vod
Sep. 24, 2021 18:08 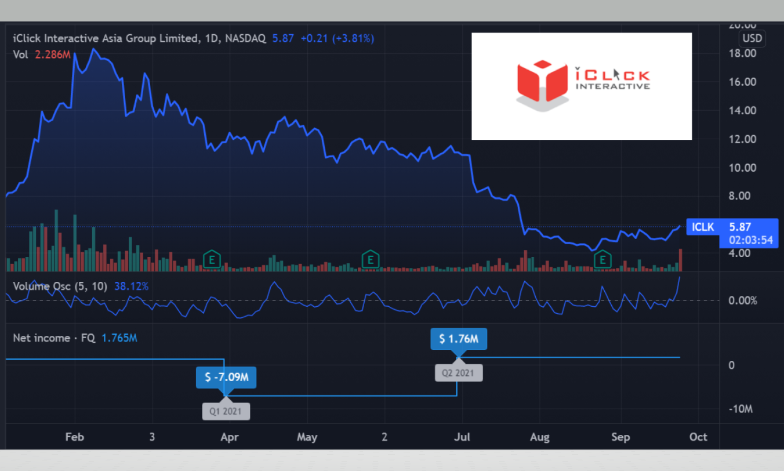 A group of investors, namely, the affiliates of Hong Kong-based PAG Pegasus Fund LP and Oasis Management Co. Ltd., have proposed to acquire iClick at $6.75 per share. That represents an upside of 19% from yesterday's close of $5.65.

The board of the company is evaluating the proposal, the report said. IClick did not specify whether the chairman, co-founder, and CEO of the company, Jian (T.J.) Tang, is in on the deal, nor whether the former chairman and CEO, Sammy Hsieh, is involved. Oasis is led by Seth Fischer since he founded the investment firm in 2002; he previously managed the Asian portfolio of Highbridge Capital Management. PAG Pegasus is a somewhat obscure private company. If Tang is indeed not part of the buyout group, it is possible he will propose a counter offer.

The news marks another going-private consideration by a Chinese U.S.-listed firm as they have been beaten down in trading over the past year and more in New York. Investor uncertainty on Chinese stocks has been fueled by the lack of information and allegations of fraud, the massive 2021 regulatory crackdown on tech by Beijing, and Sino-American tensions, just to name a few major risk factors.

IClick, despite delivering improved financial results above analyst expectations, has watched its market value decline about 25% year-to-date, in-line with the general trends on Chinese stocks. Its management has continuously made attempts to boost its stock, launching and then upsizing share repurchase plans and offering shares to employees in benefit plans, according to filings with the SEC.

Yet to no avail. To the investors, the firm remained unseen and obscure. For nearly six months this year, shares in iClick traded above the level of $10 a share, peaking at $19.10 in February. But investors failed to see iClick as a long-term, secure, value-bringing play that Tang attempted to project. On Friday, gains of the buyout news took the stock to $6.02 per share.

Analyst consensus on iClick is a unanimous "buy," with a price target range from $8.10 to $17.56 per share and the median of $13.40, according to analysts surveyed by WSJ Markets and CNN Business. TipRanks shows a "moderate buy" with a $9 consensus target.

IClick is a provider of enterprise and marketing solutions in cloud. In the second quarter, iClick booked $78 million in revenue, up 34% year-over-year, on income of $597,000 in contrast to losses a year ago. In the full year 2021, iClick expects to generate $318 million to $338 million in revenue. The company has been traded in New York since December 2017.

In its filings, iClick has said that it faces competition from "large and well-established internet companies, such as Alibaba, Baidu, Tencent and Google." However, among its shareholders iClick counts Baozun Inc. (Nasdaq: BZUN), with 1.8% of the voting power according to the 2020 annual report. Baozun is an e-commerce company bringing overseas brands to China – and the playing field is now better for the smaller Baozun than for the giant Alibaba Group (NYSE: BABA; HKEX: 9988), now suffering from the antitrust crackdown.

On a side note, Simply Wall St has just published a report on Baozun showing it's also quite undervalued, based on the Discounted Cash Flow (DCF) model, and Wall Street analysts also give BZUN a "buy."