Covid-19 lockdowns continue to weigh on Chinese EV stocks, as does the threat of delisting over U.S. SEC auditing requirements.
Jennifer Chan
May. 02, 2022 18:16 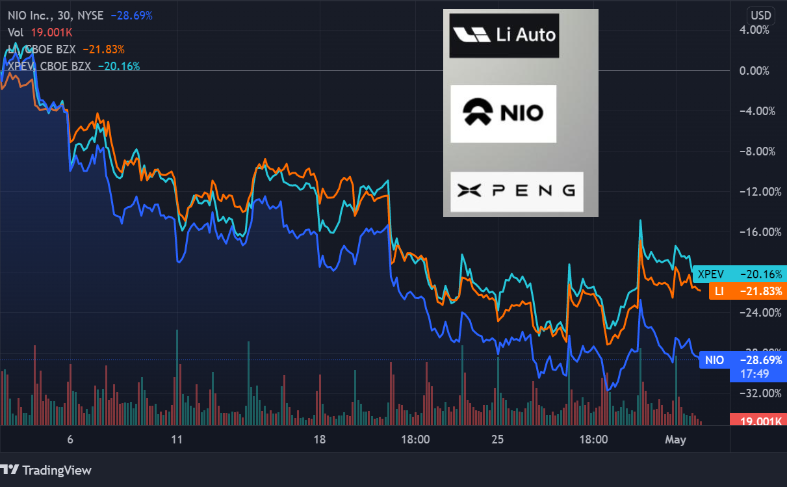 Since April 1, all three stocks have declined significantly as uncertainties over the continued U.S.-China listings, supply issues, and raw materials shortage weighed on investor sentiment.

Li Auto's factory, as well as the majority of its suppliers, are located in the region of strict lockdowns. As the co-founder and president of Li Auto, Yanan Shen, commented in the deliveries report on Sunday: "The COVID-19 resurgence in the Yangtze Delta region continues to cause severe industry-wide disruptions in supply chain, logistics and production since late March."

Shen said Li Auto was unable to maintain production after it used up its parts inventory.

Last week, Li Auto was identified by the U.S. Securities and Exchange Commission among the Chinese firms due for an audit check and under threat of delisting should they remain noncompliant.

Nio said its production has been recovering gradually from the "supply chain volatilities and other constraints."

In a new development, Nio said the first batch of tooling trial builds of the ET5 rolled off the production line at its new manufacturing plant in Hefei on April 29. The company expects to begin deliveries of the ET5 in September.

Shares of NIO were trading near $17.11 apiece intraday, down 29% over the past month. Earlier, The Motley Fool warned NIO could crash as it is expected to come under U.S. SEC scrutiny after Li Auto.

"April deliveries reflect the Company's relentless effort to mitigate the current conditions with support from various authorities and industry partners," XPeng said in a terse statement.