USD Index: Are New Milestones in the Cards?

(Sunshine Profits, Nov. 8) While the greenback's failed breakout on Nov. 4 may seem bearish, it faced a similar situation in August and October, only to recover and achieve new highs.

After the USD Index's negative response to the ECB's monetary policy meeting on Oct. 28, I warned on Oct. 29 that dollar bears were unlikely to celebrate for much longer. I wrote:

Based on the rather random comment during the conference, the traders panicked and bought the EUR/USD, which triggered declines in the USD Index (after all, the EUR/USD is the largest component of the USDX).

Was the breakout to new 2021 lows invalidated? No. The true breakout was above the late-March highs (the August highs also served as a support level, but the March high is more important here) and it wasn't invalidated.

What was the follow-up action? At the moment of writing these words, the USDX is up and trading at about 93.52, which is just 0.07 below the August high in terms of the closing prices. Consequently, it could easily be the case that the USD Index ends today's session (and the week) back above this level.

And after the forecast turned into reality, the USD Index surged above 94 and remains poised to resume its uptrend over the medium term. To explain, if we zoom in on the four-hour chart, it highlights the importance of the price action on Nov. 5. During the session, the USD Index hit a new 2021 intraday high before a small reversal occurred. This might seem bearish at the first sight (it's a failed breakout, after all)…

However, similar developments were also present in August and October. After the dollar basket attempted to make new highs and failed, the greenback eventually regained its composure and achieved the milestones. As a result, another 2021 high should occur sooner rather than later. 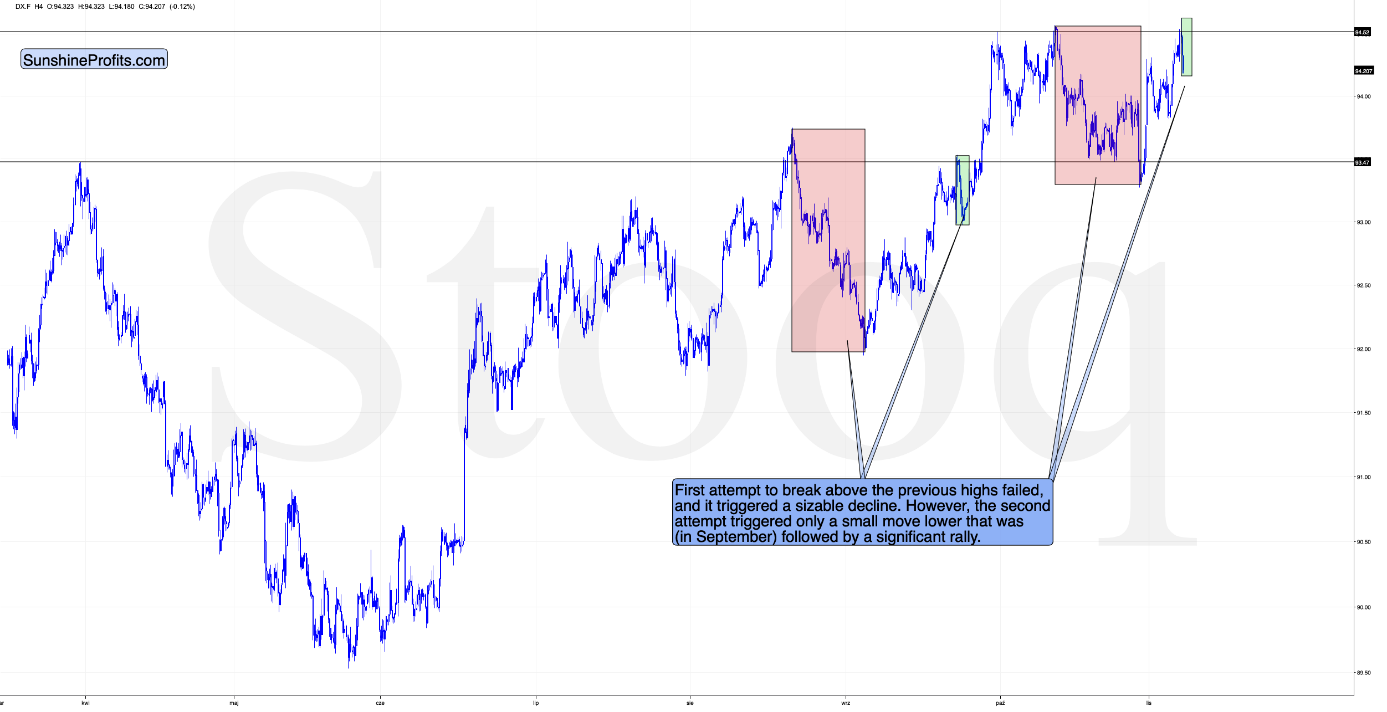 The first failed attempt to break above the previous highs triggered sizable short-term declines. This happened in August (marked with red). The second – September – attempt triggered only a small correction (marked with green) that was then followed by a bigger rally.

Similarly, the – marked with red – October invalidation was followed by a sizable decline, and the current one (marked with green), is relatively small. And it's likely to be followed by a short-term rally, just like the September correction was.

On top of that, as you can see on the below chart, the current setup for the USD Index and gold mirrors what we witnessed in early August. Following its sharp summertime rally, the USD Index moved close to its 50-day moving average without reaching it. And after buyers stepped in, the USD Index resumed its uptrend and made a new 2021 high. Moreover, with a similar pattern and a similar reading on the USD Index's RSI (Relative Strength Index) present today, the greenback's outlook remains robust. I marked both cases with red, vertical, dashed lines below.

More importantly, though gold, silver, and mining stocks' upswings concluded once the USD Index bottomed close to its 50-day moving average in August and sharp drawdowns followed. Moreover, while gold, silver, and mining stocks' recent rallies were likely underwritten by expectations of a weaker USD Index (it did fail to move to new highs, right?) , technical (as described above and below) and fundamental realities contrast this thesis.

As a result, the 2021 theme of 'USD Index up, PMs down' will likely resume over the medium term. 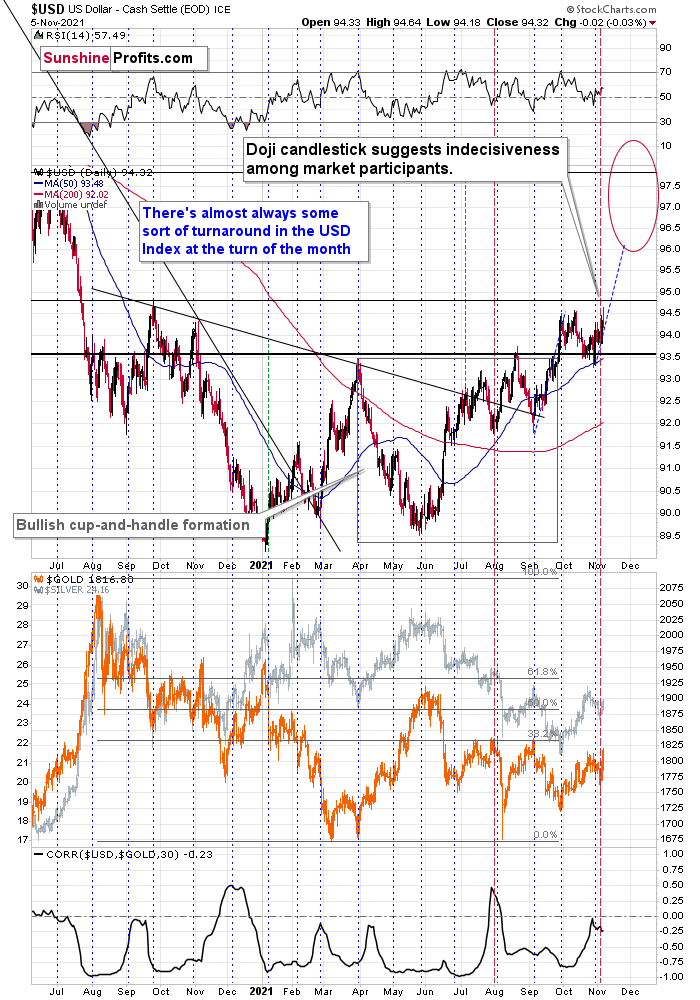 Equally bullish for the greenback, the Euro Index remains overvalued and should suffer a material drawdown over the medium term. For example, the index's previous lows, its 50-day moving average, and its declining resistance line combined to create major resistance and the Euro Index is now retesting its 2021 lows.

As a result, the next temporary stop could be ~1.1500 (the March 2020 highs, then likely lower). For context, the EUR/USD accounts for nearly 58% of the movement of the USD Index, and that's why the euro's behavior is so important. 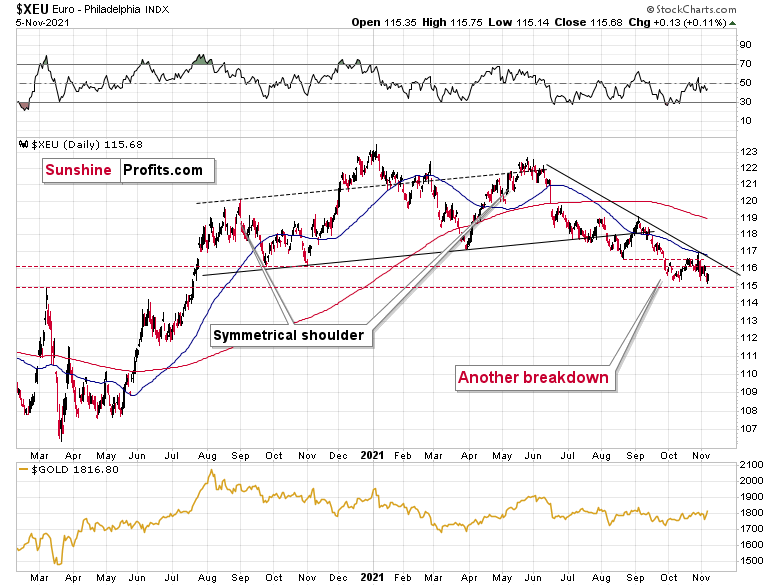 Adding to our confidence (don't get me wrong, there are no certainties in any market; it's just that the bullish narrative for the USDX is even more bullish in my view), the USD Index often sizzles in the summer sun and major USDX rallies often start during the middle of the year. Summertime spikes have been mainstays on the USD Index's historical record and in 2004, 2005, 2008, 2011, 2014 and 2018 a retest of the lows (or close to them) occurred before the USD Index began its upward flights (which is exactly what's happened this time around).

Furthermore, profound rallies (marked by the red vertical dashed lines below) followed in 2008, 2011 and 2014. With the current situation mirroring the latter, a small consolidation on the long-term chart is exactly what occurred before the USD Index surged in 2014. Likewise, the USD Index recently bottomed near its 50-week moving average; an identical development occurred in 2014. More importantly, though, with bottoms in the precious metals market often occurring when gold trades in unison with the USD Index (after ceasing to respond to the USD's rallies with declines), we're still far away from that milestone in terms of both price and duration.

Moreover, as the journey unfolds, the bullish signals from 2014 have resurfaced once again. For example, the USD Index's RSI is hovering near a similar level (marked with red ellipses), and back then, a corrective downswing also occurred at the previous highs. More importantly, though, the short-term weakness was followed by a profound rally in 2014, and many technical and fundamental indicators signal that another reenactment could be forthcoming. 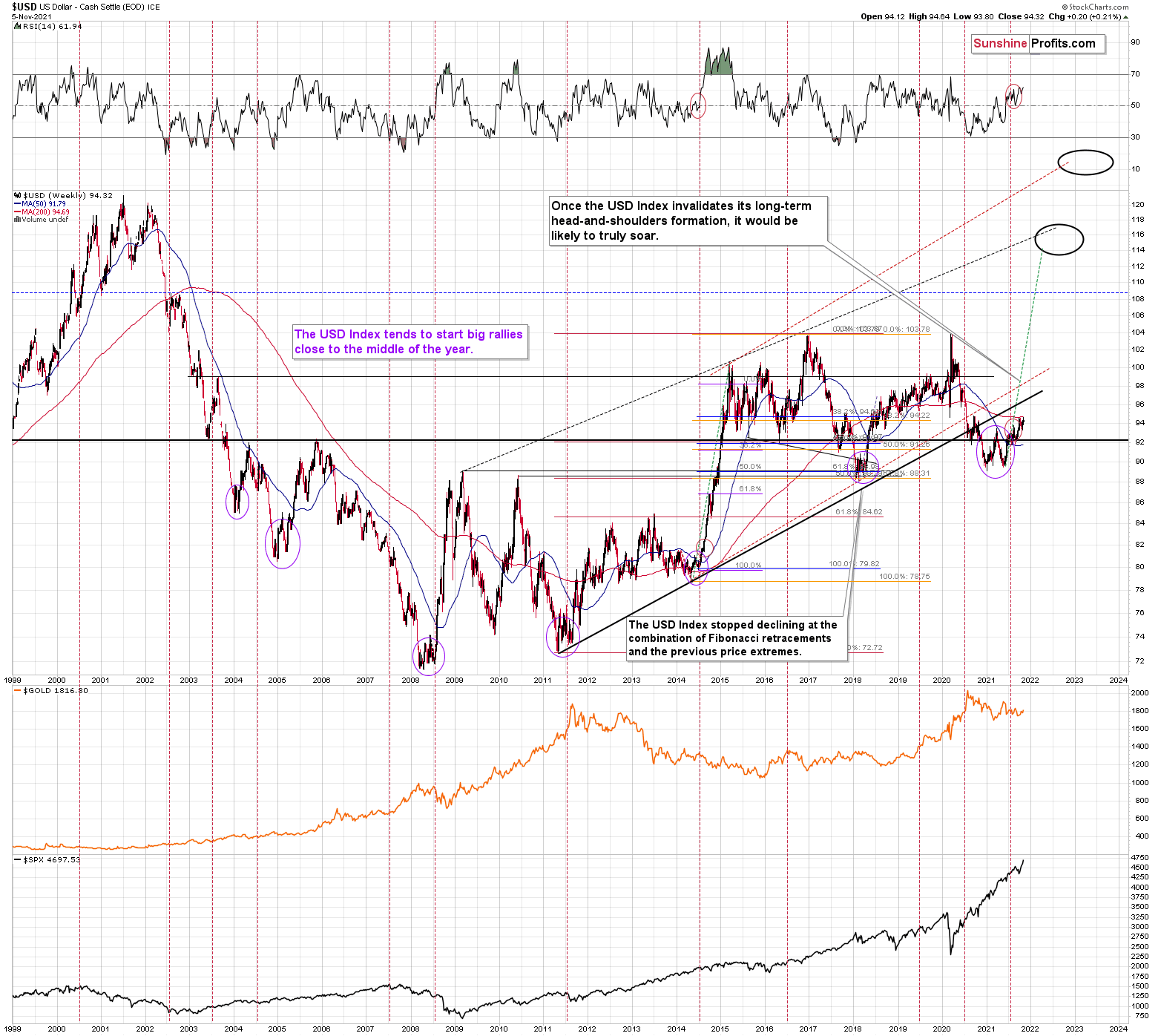 Just as the USD Index took a breather before its massive rally in 2014, it seems that we saw the same recently. This means that predicting higher gold prices (or the ones of silver) here is likely not a good idea.

Continuing the theme, the eye in the sky doesn't lie. And with the USDX's long-term breakout clearly visible, the wind still remains at the dollar's back. 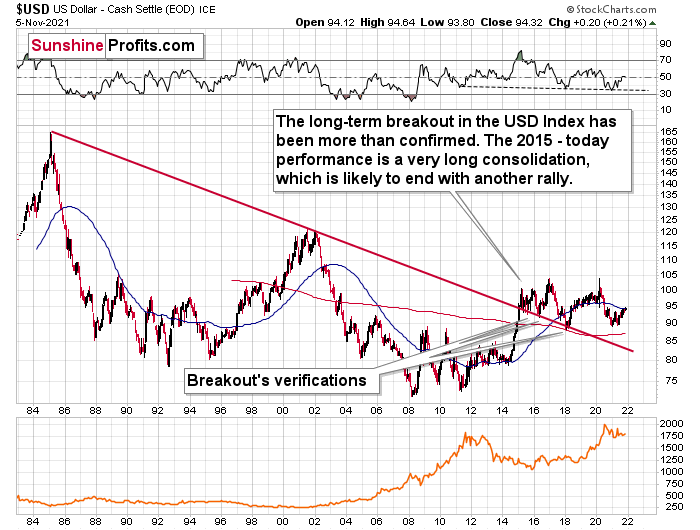 With my initial 2021 target of 94.5 already hit, the ~98 target is likely to be reached over the medium term, and the USDX will likely exceed 100 at some point over the medium or long term. Keep in mind though: we're not bullish on the greenback because of the U.S.' absolute outperformance. It's because the region is fundamentally outperforming the Eurozone, the EUR/USD accounts for nearly 58% of the movement of the USD Index, and the relative performance is what really matters.

In conclusion, the USD Index remains in the driver's seat and new highs should materialize over the medium term. And while gold, silver and mining stocks have rode the S&P 500 higher recently, history has been unkind when the precious metals ignore technical and fundamental realities. Moreover, with gold, silver, and mining stocks' strong negative correlations with the U.S. dollar standing the test of time, it's likely only a matter of time before investors realize this as well.

Thank you for reading our free analysis today. Please note that the above is just a small fraction of today's all-encompassing Gold & Silver Trading Alert. The latter includes multiple premium details such as the targets for gold and mining stocks that could be reached in the next few weeks. If you'd like to read those premium details, we have good news for you. As soon as you sign up for our free gold newsletter, you'll get a free 7-day no-obligation trial access to our premium Gold & Silver Trading Alerts. It's really free – sign up today.

All essays, research and information found above represent analyses and opinions of Przemyslaw Radomski, CFA and Sunshine Profits' associates only. As such, it may prove wrong and be subject to change without notice. Opinions and analyses are based on data available to authors of respective essays at the time of writing. Although the information provided above is based on careful research and sources that are deemed to be accurate, Przemyslaw Radomski, CFA and his associates do not guarantee the accuracy or thoroughness of the data or information reported. The opinions published above are neither an offer nor a recommendation to purchase or sell any securities. Mr. Radomski is not a Registered Securities Advisor. By reading Przemyslaw Radomski's, CFA reports you fully agree that he will not be held responsible or liable for any decisions you make regarding any information provided in these reports. Investing, trading and speculation in any financial markets may involve high risk of loss. Przemyslaw Radomski, CFA, Sunshine Profits' employees and affiliates as well as members of their families may have a short or long position in any securities, including those mentioned in any of the reports or essays, and may make additional purchases and/or sales of those securities without notice.