Your Week In Brief

What Luckin Coffee Tells Us About China and the Coronavirus. Plus, Regeneron's Magic Mice and Why It's Time to Buy Weed (Stocks).
Gregory Bergman
Apr. 04, 2020 05:00 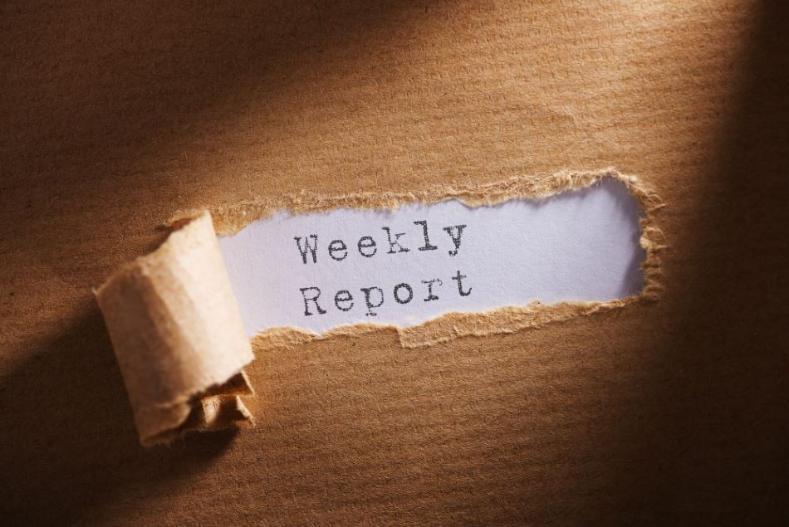 First things first, say goodbye and good riddance to the worst first quarter for U.S. equities in history. The Dow is down 23.2% for the quarter, while the S&P 500 is down 20%. The Nasdaq Composite's downturn was more contained, but still fell precipitously. Small-cap stocks in the Russell 2000 have been obliterated. All of this due to a coronavirus which has now killed 50,000 people and infected 1 million globally. America is the most infected country, with New York City being the most hard-hit; hospital beds, masks, and life-saving ventilators are all in short supply. The worst of it is yet to come. Luckily, Governor Cuomo has stepped up and is now, quite deservingly, the most trusted political figure on this issue, at least in New York. This is in contrast to Mayor DeBlasio, whose initial blasé attitude towards the virus rivaled Trump's, which will not be forgotten by New Yorkers. He is an idiot. One can only hope that he soon moves out of the Governor's Mansion, and into a triage tent in Central Park.

More of a Cessation Than a Recession

We are in a recession, make no mistake. And we will be for some time, but we are in a unique one brought on by a cessation of most economic activity intentionally. We have turned the economic switch off, creating a record 6.6 million unemployment applications last week, a stunning figure. If this were a normal recession, the Dow would be half of what it is. Because this is a self-induced recession, we need to keep a close eye not just on the unemployment figures, but on the labor participation figures. If the labor participation rate stays about the same, then we can assume that once we flip the economic switch back on, the economy can get back to where it was pre-coronavirus relatively quickly. It is worth noting that even in the "good" economy, our labor participation rate is abysmal, prompting many to call out standard employment measurements as outdated and unhelpful.

The Chinese answer to Starbucks, shares in Luckin Coffee Inc. (Nasdaq: LK) plummeted over 84% after the company announced it had launched an internal investigation regarding 2.2 billion yuan ($314 million) in allegedly fabricated transactions. Luckin became the short target of a California-based activist research firm Muddy Waters Research in early February, posting an anonymous short report against Luckin in its Twitter. The report accused the company of inflating the number of items per store per day by at least 69% in the third quarter in 2019 and 88% in the fourth quarter in 2019.

So what do we make of this? Luckin has fallen so far so fast I wouldn't sell if if you are holding. A scandal, even of this magnitude, will be likely  be lost in a blizzard of bad market / coronavirus news. The Luckin story can be likened to the Chinese government's response to COVID-19. Did they and are they still fudging the numbers of coronavirus deaths and cases? Probably. Are they still beating the virus compared to other countries? Probably. Likewise, Luckin may be lying about $314 million in sales but they do have coffee shops and they do sell a lot of coffee. At this level, it's a hold. I'd wait to see if it falls under $4 before you buy.

In a list by Creditntell, a research company, as of April, over 115,000 retailers have been shut down, a list that excludes companies with less than 25 stores. Retail is one of the most common jobs in America; these closings are a big part of why the unemployment numbers spiked this week. Macy's, the iconic American department store, whose flagship NYC location is famous for its Thanksgiving parade, has seen its stock slashed by 70%. After falling to an all-time low Wednesday morning, the largest U.S. department store was kicked off the S&P benchmark. World's largest department store? How about the world's largest hospital, instead? Nothing like a snazzy cashmere mask to match your sweater.

Of all the truly down and out department stores, Kohl's (NYSE: KKS), at its current trading level, might be the one most worth the risk.

Weird Science and the Year of the Rat (Mouse, Really)

This week some encouraging news of the scientific front was responsible, along with a rise in oil prices, for the reason that the market isn't trading down another 10%. American science, it seems, is finally on the case.

I put a buy out on Moderna (Nasdaq: MRNA) drug last month at $27 per share. The Massachusetts-based company began its first human clinical trial with funding support from the National Institute of Health to test a coronavirus treatment. The news sent its stock as high $34.98 per share later in the month and is now back over $34 per share. If you are going to buy these vaccine hopefuls across the board, I'd get in on this after more news of clinical progress is announced. Hold if you bought, but wait to buy.

Pharmaceutical giant Johnson & Johnson (NYSE: JNJ) has been ramping up its production on a vaccine. I put a buy on this at $119 per share on March 20; it now trades at $132. Also, I chose Roche (OTC: RHHBY) at $35 per share, now at $41. Roche is entering into a phase 3 trial to apply its stroke treatment drug, Actemra to treat COVID-19, while J&J is partnering with U.S. Department of Health and Human Services to fund over $1 billion in COVID-19 vaccine and antiviral treatment R&D. J&J looks to have a supply of more than 1 billion doses of the vaccine, which the company expects to have in clinical trials by September 2020. The first batches of the vaccine may be available for emergency use by early 2021. While that is far too long away, we're talking about a billion doses. And one thing is clear: This virus, and other coronaviruses (we have already had three coronavirus pandemics this century), will most certainly be bat. Sorry, I mean back.

California-based Gilead (Nasdaq: GILD) made headlines on its testing of Remdesivir, a drug they tried using to treat Ebola, only to fail. However, the company got the green light from the FDA to pursue phase three studies to use the drug to fight COVID-19. I am not a big believer in Gilead  to treat COVID- 19, but with $22 billion in revenues, it is a safe buy. I would wait until it falls back under $69 per share from its current $78 price.

Other vaccine players worth looking at are Inovio Pharmaceuticals (Nasdaq: INO) and Novavax (Nasdaq: NVAX), and the China-based Cansino. Cansino (HKEX: 6185) was the first vaccine to reach phase one in China. Since the report, Cansino has watched its stock jump more than 57% to HK$142 per share as of Tuesday. If you want to bet on a stock that will move the most on news, real or otherwise, bet on Cansino. The scientists are rumored to be hopped up on Luckin Coffee as they work through the night on a vaccine. But, of all the vaccine stocks, Regeneron (Nasdaq: REGN) is the one I would put my money to stop COVID-19 in its tracks.

Regneron Pharmaceuticals is attacking the virus on two fronts: first, through a partnership with French company, Sanofi, it is entering into a second pivotal study to repurpose Kevzara, an approved drug used to treat pain and swelling rheumatoid arthritis, to treat COVID-19; and second, the company is working on a novel treatment after claiming to had a breakthough, identify hundreds of virus-neutralizing antibodies that could potentially be used in a cocktail drug.

Regeneron became famous for its antibody discovery capabilities to pathogens including Ebola and Middle East respiratory syndrome coronavirus (MERS-CoV). Regeneron develops what are called monoclonal antibodies, which are proteins produced by the immune system that can neutralize pathogens. Regeneron's antibodies are made in mice that have been genetically modified to have human-like immune systems. The company has had a patent for years on its magical mice, and with its history of success and innovative approach, this is the stock to bet on long-term to end the coronavirus crises.

Before Regeneron's mice can save us, we need to test as many people as possible. Abbott Laboratories (NYSE: ABT) made headlines this week when it announced that it had a five-minute test to treat the coronavirus.  As a result, Abbot watched its stock leap to 30-day high of $84.40 per share. Abbott is planning on delivering 50,000 testing units each day. Not nearly enough, but a start. At back down under $79 per share, it is a buy.

Having an unfortunately weak ego-structure and being prone to deep paranoia, I am not much of a marijuana consumer, although I do attribute most of my good ideas to its usage.

While marijuana will not cure COVID-19, it might make you worry less about getting it. Considered an "essential" business in CA and Co and other states, weed stocks have started to bounce back and I think are now at their lows. The trick here is to look for big ones with solid balance sheets that will survive the downturn like Aurora Cannabis (NYSE: ACB), which generated CA$56 million in net revenue in the second-quarter results it released in February. Through the first two quarters of 2018 and 2019, it brought in CA$131 million in sales. And in its 2019 fiscal year, Aurora's top line of CA$248 million was nearly quadruple its prior-year tally of CA$55 million. It is rumored to be short on cash, but this is a buy at now 83 cents – within a couple of quarters, the stock could easily double or get back up to $4 per share.

Another weed stock to buy is Canopy Growth (NYSE: CGC), arguably the most recognized cannabis brand in Canada. Canopy Growth has had a solid cash position, receving a $4 billion equity investment in November 2018 from Modelo and Constellation Brands. But the easy and safe way to pay the cannabis space is to buy Horizons Marijuana Life Sciences ETF (OTCBB: HMLSF).

Forget about oil, which is (hopefully) on the way out eventually anyhow. Many pot stocks have lost 50% to 95% of their value. But no matter how and the economy will be for a year or more, the cannabis industry still has the potential to grow worldwide sales to $50 billion (or more) on an annual basis by 2030. And with the economy in shambles, states need all the money they can get. I predict that by the end of the next presidential term, whether Trump, Biden or Bernie, marijuana will be legalized on the federal level.

The virus is temporary. But weed is here to stay. And in times like these, even I desperately want to smerk a berl.